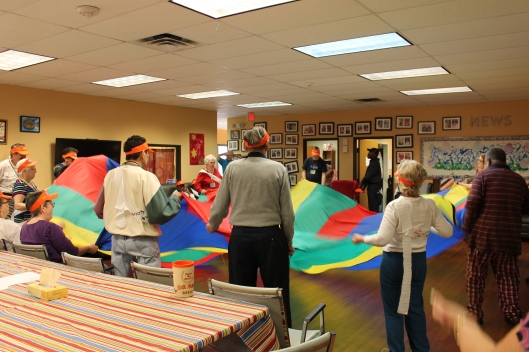 It’s a simple word, but a hard one to embrace when you’re stretched thin as a parent who is caring for both your children and your parents or in-laws.

It’s a word that has been essential to Kimberly McKneely, who has an 81-year-old mother-in-law with some memory loss living with her. She also has a 12-year-old daughter and two sons with special needs who are 18 and 19.

Instead, more people are in the “pivot generation,” supporting their parents as well as their adult children, who may or may not be still living at home. This change from sandwich to pivot is happening for two reasons: Parents are living longer and the age when they can no longer care for themselves is older, and adult children are delaying leaving the nest.

Annette Juba, the deputy director of programs at AGE of Central Texas, says people who are either sandwiched or pivoting often are trying to take care of similar needs for both generations. The difference, she says, is that even though you might be helping with diapers for both age groups, you cannot treat the adult like a child. You have to do it in a way that doesn’t feel insulting.

For the person being cared for, it’s hard to admit that she is in the position where she needs help, says Cheryl Young, a social worker at Family Eldercare. “But the reality is, we all will.”

Young says often seniors are hesitant to ask for help because they don’t want to put excess pressure on the family and they don’t feel like they have anything they can contribute.

Children also might not be as understanding because they don’t know what’s going on with Grandma or Grandpa and they want to have their needs taken care of first.

Creating peace between generations happens when everyone understands one another’s perspective. Why does Grandma or Grandpa do what they do? How should a daughter approach a parent who needs to be bathed or can no longer be home alone? How stressful is it to be the caregiver to both daughter and mother?

Both AGE and Family Eldercare offer caregiving seminars, and AGE has both a regular caregivers’ support group and a concert series for caregivers and their seniors.

One of the most important things caregivers can do is to take care of themselves. That means exercising, eating well and taking some alone time.

Often caregivers make everyone else’s doctors’ appointments but then forget to make their own. Caregivers have to give themselves permission to say, “No,” even if it’s just, “No, not right now.” Juba says a lot of people are operating in the “arena of guilt,” where they are afraid to say no, afraid to put themselves first.

Caregivers should also arm themselves with as much information as they can about Mom and Dad’s medical conditions and financial situations. They also can enlist other people to help with care. Geriatric case managers take on the role of managing a senior’s medical needs.

Adult day care programs give seniors a place to go during the day while their children are at work. Some agencies run them on a sliding scale depending on income, but you can expect to pay similar rates to day care.

McKneely’s mother-in-law goes to one of AGE’s centers. She thinks she’s a volunteer at the center to help fellow seniors. That gives her purpose and makes her want to be there.

Stephanie Hoffman, Program Director at AGE’s Austin Day Health Center, says it’s important to give seniors purpose so they are not sitting at home all day without things to do.

“That’s been huge,” McKneely says of her mother-in-law’s attendance at the center. “I don’t have to worry about her. … It makes her happy.”