AGE of Central Texas celebrates its 30th year in 2016.  To mark this landmark anniversary, the community organization will debut a new “Caregiver Lecture Series,” recognize philanthropic leaders with the 22nd annual AGE Awards, and launch the Bert Kruger Smith and Willie Kocurek Legacy Fund in honor of the organization’s co-founders. 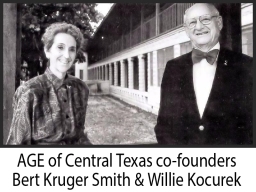 Founded 30 years ago as “Austin Groups for the Elderly,” AGE of Central Texas has grown extensively to serve older adults and their caregivers throughout Travis, Williamson, Bastrop, and Hays counties.  Census numbers indicate the population of adults 60 and older in Central Texas will grow by 67% by the Year 2020, so the need for services for older adults and family caregivers will climb rapidly during the next few years.

Today, an estimated 5.4 million Americans have Alzheimer’s disease or similar dementia, and the number of individuals diagnosed each year is growing steadily as the population ages. Today’s treatments only temporarily ease some dementia symptoms, so the need for AGE’s programs and resources – including therapeutic adult day health care in Austin and Round Rock, caregiver education and resources, and early memory loss support – remains at an all-time high and growing.

To provide additional education and support to family caregivers, the new “Caregiver Lecture Series” will debut on April 2nd through 30th.  Held on three Saturdays at the AGE Building (located at 3710 Cedar Street in Austin), the free seminar series will cover legal, financial, and healthcare issues that caregivers encounter when caring for an older loved one. Registration will open on February 1, 2016, via the AGE website at www.AGEofCentralTX.org. 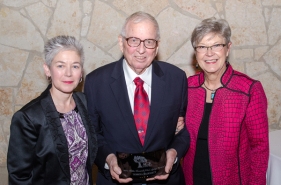 Also in April, AGE will honor select Central Texas community leaders at the 22nd Annual AGE Awards.  Slated for Thursday, April 7th, at the LBJ Presidential Library on the University of Texas campus, the annual AGE Awards recognize outstanding achievements by individuals and local organizations whose leadership and contributions have made a significant impact on the quality of life for aging adults and their caregivers in Central Texas.

To further celebrate the 30th anniversary year, AGE of Central Texas is honoring the organization’s co-founders – and their personal mission to touch people’s lives – by proudly establishing the Bert Kruger Smith and Willie Kocurek Legacy Fund.  The founding group of community investors will be creating a cornerstone of support launch AGE of Central Texas into the next successful 30+ years of serving the Central Texas community.  Legacy Fund founding members will also be invited to a party at the Governor’s Mansion – hosted by Texas First Lady Cecilia Abbott – along with other opportunities throughout the year.  For more information on the Legacy Fund or the AGE Awards, call Lauren McPhail at (512) 600-9283.

AGE of Central Texas also operates the only licensed Adult Day Health Centers in Central Texas – with locations in Austin and Round Rock – in addition to free caregiver education and resources, no-cost durable health equipment lending, “Memory Connections” early memory loss support programs, peer-based computer classes for seniors at the AGE Computer Lab, and free caregiver classes across four counties through CaregiverU. For more information on the programs and resources provided by AGE of Central Texas, visit www.AGEofCentralTX.org or call (512) 451-4611.